There are some interesting municipal elections taking place Tuesday, June 4. Below are some of the races we’re watching.

The race is on to fill the Los Angeles City Council District 12 seat vacated by Mitch Englander. Although the body is officially nonpartisan, Englander was the Council’s lone Republican. A number of Democrats hope to get one of their own into the seat. And political observers say they’ve got a small chance to do so.

If no candidate receives more than 50% of the vote, a general election will be held August 13.

There will be no voting booths or punch cards in Riverside Tuesday. The race for City Council is mail-in and drop-off only. But its outcome is an important one for the city. Over half of the City Council could end up with new leadership next year.

In Ward 1, incumbent Mike Gardner is facing a challenge from Erin Edwards and Philip Falcone.

In Ward 3, the candidates are Warren Avery, Ronaldo Fierro, Darryl Martin, Lori Pelgone, Ricardo Rubio, Wayne Skiles, and Stevie Taken. Mike Soubirous, who currently occupies the seat, announced he was not running for re-election in January.

In Ward 7, the candidates are John Denilofs, Steven Hemenway, Thomas Jordan, William Pearce, Maartin Rossouw, and Rodrigo Torres Jr. Steve Adams, who was appointed to the seat in 2017, never intended to run.

A candidate needs more than 50% of the vote; otherwise they’ll head to a runoff on Nov. 5.

St. Helena is holding a referendum on the Mobile Home Rent Stabilization Ordinance approved by the City Council in November of 2018. If Measure F passes Tuesday, the ordinance will take effect. If the measure fails to pass, it will not. 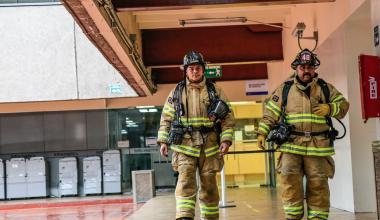